Get ready because season 3 will bring *new* challenges, stars and fails. And even cooler – each week will be themed, so expect theme weeks like: Supersized Prizes in Paradise week, Spot the Shark week, WWE week, Celebrity week and more.

Daniella Monet, our fav actress from shows like Victorious and Baby Daddy, is back as host of the smash hit show. We caught up with Daniella to get the low-down on what to expect this season.

Celeb Secrets: I know you are promoting Paradise Run! Tell us a little bit about the third season.

Daniella Monet: “The third season has bigger prizes – like much bigger prizes. We’ve got a lot more celebrities – we’ve got WWE wrestlers, athletes, musicians – it’s like next level! We’ve got a whole new intro which is really cool. We’ve got this play-live volcano that’s like 45 feet tall that was all handmade – it took two weeks to put together – there’s like a water slide in it. It’s going to be really cool!”

Celeb Secrets: And I know you guys film in Hawaii! How crazy is that you get to go to work in Hawaii?

Daniella Monet: “And I live on campus. I always say I live on the resort so I’m like – that’s easy! I just get to wake up and walk to set like okay, perfect sounds good to me.” 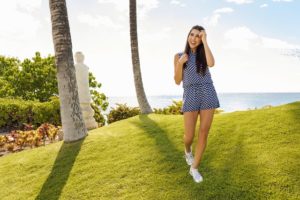 Celeb Secrets: What’s like a typical day when you’re filming?

Daniella Monet: “We try to shoot 2 episodes a day. So typically I wake up, I get ready for the show – you know hair, makeup, wardrobe and do the intro and then go and do the challenges – all 3 of them. Then I meet them at the finish line, and then I do it all over again after lunch.”

Celeb Secrets: What is your favorite part of the show?

Daniella Monet: “My favorite part is seeing how excited the kids are to be there and watching them work so hard. They get competitive and it’s physically draining! I love seeing them work… work for something! That’s a cool thing.”

Celeb Secrets: How long have you been working with Nickelodeon now?

Daniella Monet: “Oh my god, like 12 years! It’s insane! I’m so grateful. I actually really love working with Nickelodeon. I enjoy all of it, I love all of the people I work with and honestly, I used to babysit… I used to work at a daycare in a gym… and I realized how cool it was to be on shows that the kids I would watch watch and care about – like that’s the best! I would much rather have kid fans than anyone else.”

Celeb Secrets:  And would you say you’ve grown as an actress or host because you do host now?

Daniella Monet: “Yeah! Both, definitely. In terms of acting, I love to do – I’m a sitcom actress, that’s my style, but I’ve actually grown as a person! So of course my style has also evolved as well.”

Celeb Secrets:  I know you guys have celebrity guests that are Nickelodeon kids as well. So do they come up to and say ‘oh I used to watch you on Victorious as well. What advice do you have for me?’ Is there any encounters like that?

Daniella Monet: “Yeah! Totally! They’re all very cool. I think part of them look up to me and then part of them just want to make fun of me all the time because it’s hysterical. They say ‘what was it like meeting and working with dinosaurs? How was it like having a brick as a cellphone?’ They would literally make comments – like ‘you met every single president, how was that?’ I think it’s hysterical. (laughs) I’ll take it!”

Celeb Secrets: What’s the best piece of advice that you’ve given them for their career?

Daniella Monet: “I think, honestly, just lead by example. I would just hope that I’m big enough of a role model to them that they can just sort of see the way I am around people. I’m a team player – when I work on a show, I’m on the show, but I’m also a part of the crew. For some reason, I always blur those lines, I love it – I love the people, I’m a people person. And I hope the kids see that and learn to respect everyone who is involved in a project because literally we wouldn’t get there unless it was for everyone involved! Just cause you’re the one person on camera – it’s not just about that one person.”

Celeb Secrets: What do you really want people to look out for when they watch this upcoming season?

Daniella Monet: “I’d say the most fun part about watching the show, aside from watching their reactions which is completely real, it’s not scripted… it’s in the moment. These kids are hysterical! It’s just to look out for rooting for your team or trying to figure out the challenges before the actual team because that’s what I catch myself doing. I would watch and be like ‘come on, oh it’s right there!’ I like losing my mind, I think that part is fun.”

Celeb Secrets: We are Celeb Secrets, so what is a behind-the-scenes secret when filming Paradise Run that people would not know when they see it?

Daniella Monet: “I guess one thing that I think is interesting is that there’s no fakeness when it comes to the game or the challenge. People are used to watching TV shows and thinking ‘oh it’s rigged, it’s rigged,’ but you can’t in a reality competition series. It’s completely against the law, we have a lawyer on set all day every day, just to make sure every single thing follows the rules. None of the contestants are getting paid to be there so it’s all just based on the end prize so it has to be fair. So, there’s like no favoritism at all.”

Watch a promo of the exciting new season of Paradise Run! And don’t forget to tune into Nickelodeon on New Year’s Day for the big premiere.