The 2016 Billboard Music Awards is happening this weekend and we’re utterly stoked to see what this year’s ceremony will have in store.

From the fashion-forward arrivals to the award-winning finalists, the event is clearly more than just an award show. It’s a night to celebrate art, icons, and most importantly: music. To gear up for Sunday’s festivities, I’ve composed a list featuring someÂ of BBMAs’ most “OMG” moments over the years! Enjoy!

In March of 2015, Zayn Malik announced his departure from pop music group One Direction. The shocking announcement took everyone, especially their dedicated Directioners, by surprise. Despite all the speculation, the boys still held it down and managed to snatch themselves the “Top Duo/Group” award. With all the craziness swarming them at the time, it was a heartwarming thing to see that even something as major as losing a key member left the boys unscathed. Proving that there were no hard feelings, they even included Malik in their acceptance speech. That was the cherry on top of the emotionally toggling sundae. One Direction have been nominated for this award once again, including “Top Touring Artist”.

Speaking of One Direction, remember that time when Kendall Jenner nearly introduced 5 Seconds of Summer as 1D? At the 2014 BBMAs, Kendall was given one job and one job only – introduce 5SOS. It seemed to be going well at first, until Kendall Jenner somehow misread 5 Seconds of Summer for One Direction.Â  After making a complete fool of herself on national TV, Jenner took to her Twitter to explain that she only made that mistake because she didn’t have her contacts on thus resulting in her inability to see teleprompter. Although her apology seemed genuine, fandoms of both bands were not having it. Regardless of her little flub, BBMAs invited Kendall and Kylie to the 2015 ceremony to make yet another intro. Although she didn’t screw it up this time around (which is a bit unfortunate because we wanted to see sassy Kanye to come out of hiding), that didn’t matter to the crowd who sang a chorus of boos.

Taylor Swift is one of the industry’s most decorated artists. Even when she’s falling off a treadmill, people just can’t get enough of her. So it’s no surprise that her lolapalooza-esque performance of “22” at the 2013 BBMAs sparked a movement. Even her most highly profiled ex Harry Styles gave into the fad when he tweeted “I don’t know about you, but I’m feeling 22” on his birthday three years later. T-Swift has racked up a whopping eight nominees this year!

5 years after Michael Jackson‘s tragic death, the King of Pop returned to the BBMAs’ stage with a little help of modern technology. The Michael Jackson holographic performance of “Slave To The Rhythm” was without a doubt the most chilling presentation in Billboard history. It left everyone in awe (and a little creeped out), but it was a great performance nonetheless. Throughout his career, Jackson won 8/8 Billboard awards.

In 2015, Simple Minds performed their iconic tune “Don’t You Forget About Me” which had the entire crowd going. And who better to introduce them than Molly Ringwald aka “the princess” herself! In that moment, you could literally hear every nostalgic heart bursting with joy. In addition to the awesome performance, we got to reminisce Ringwald’s oustanding career as well as get treated to a Breakfast Club reunion. What else could you possible want in life? The “Pretty in Pink” starlet has recently starred in the Family Channel original movie “Raising Expectations” which debuted earlier this month. 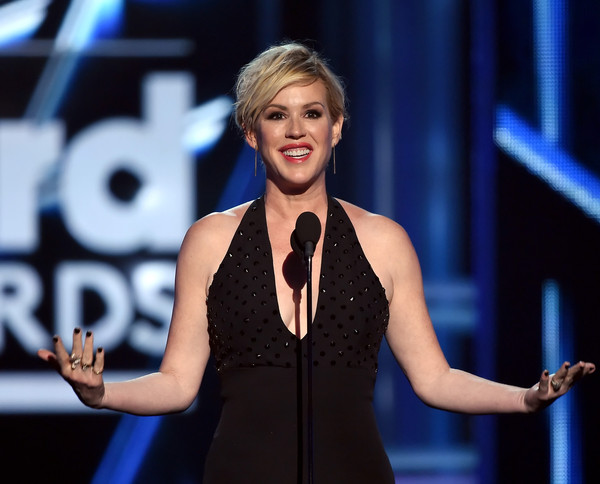