One of Celeb Secrets‘ favorite up-and-coming bands, I the Mighty has just announced that they’re hitting the road with.. wait for itâ€¦ Pierce The Veil! The San Fran native band joins The Misadventures TourÂ kicking off in Las Vegas, NV on June 5th! 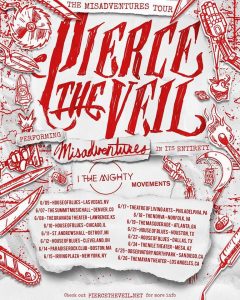 Lead singer, Brent WalshÂ shares “Ever since watching Pierce The Veil at Warped Tour, fresh off their release of ‘Selfish Machines,’ we’ve been huge fans of those guys and all that they’ve accomplished. We’re extremely thankful to cross yet another name off of our ‘Top bands we’d love to tour with’ list.”

I the Mighty has already had been a part of some impressive tours including:Â Coheed And Cambria, Balance & Composure, Say Anything,Â Hands Like Houses,Â letlive., Architects, Enter Shikari, Dance Gavin Dance,Â and The Vans Warped Tour 2014.Â

Tickets can be purchased by visiting:www.ithemighty.com.

I the MightyPierce the Veil