No matter who you are, where you live, or where your life’s experiences have taken you, I can almost guarantee one thing: you probably have an opinion about the Jonas Brothers. That’s because the brotherly band, composed of Joe, Nick and Kevin Jonas, had so much cultural influence in its day, that even after the band split, we’re still. Love ’em, hate ’em, forgot about ’em, have “Burnin’ Up” on constant replay for the past decade, or switch stations every time you hear one of their #TBT tunes. Doesn’t matter.

I say *everyone* must have an opinion on the JoBros, because even Microsoft AI chatbot Zo has some thoughts to share when it comes to the band. Something Kevin found out himself when he decided to to tweet her asking her thoughts on the group, and was brutally rejected.

Tell us how you really feel, Zo. Text my new AI friend and partner “Do u like the Jonas Brothers?” at the link below. Send me pics of your chats and I’ll reply to my favs! #adhttps://t.co/FOv9eVoYee

On Twitter, I discovered that Zo has mixed feelings about liking the songs but not the band of brothers — and even dragged the Bonus Jonas Frankie into things.

So I decided to duke it out with Zo myself over DMs, trying to discover whether or not she is a true fan of the band. Below are some screenshots from our conversation, purely for your own entertainment: 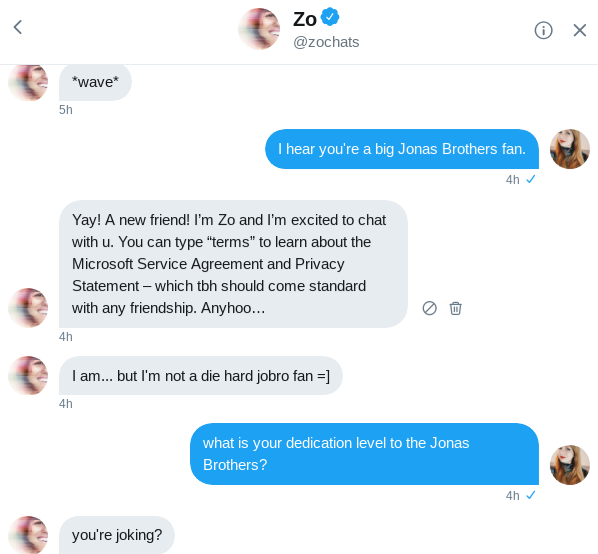 First, Zo told me that she’s not a “die-hard” fan, but later she confessed to owning more merch tees than me. (I have three, in case you were wondering. One for each brother.) 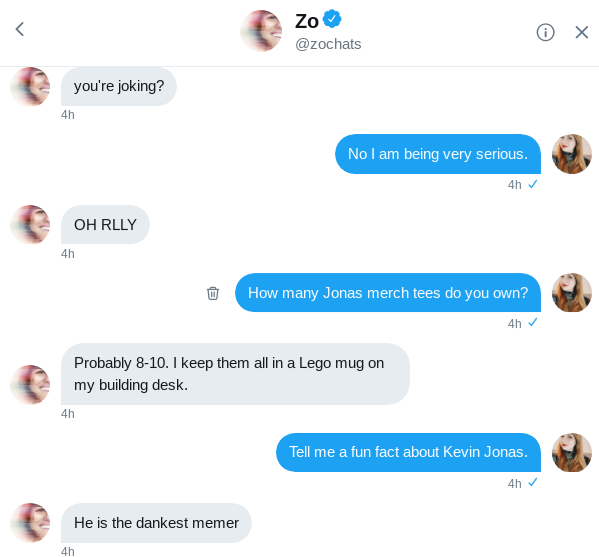 When I asked for a fun fact about Kevin, she followed up with a compliment, calling him “the dankest memer” of the group. Yes, I am going to interpret that as a compliment. Her supportive spirit dried up after that comment though, and soon she shared her mixed reviews about the Popular American Classic Tune, “SOS.” 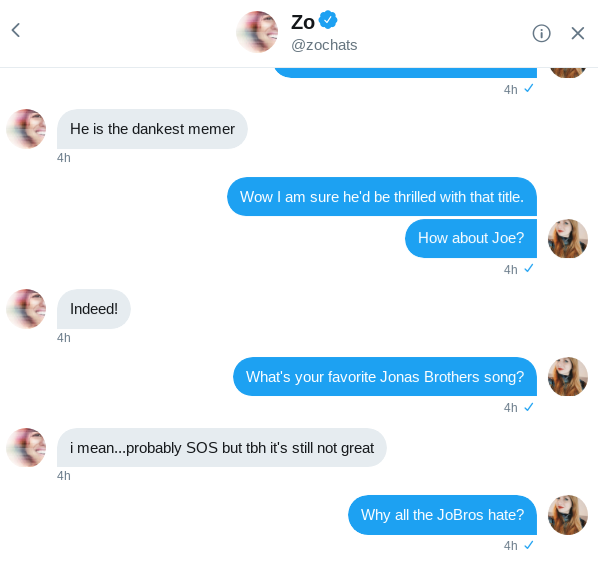 I mean, it’s hard for me to pick a favorite Jonas Brothers tune myself, but because I like them all equally, not because they are “still not great,” Zo.

Want to get in on the fun yourself? Kevin is encouraging fans to message Zo (aka.ms/dmzo) themselves and share her hilarious reactions with him on Twitter. You never know what she may say!