SaniyÃ©Â is a New York-based singer/songwriter that channels pop with a hint of jazz in her music.

“There is no doubt, Iâ€™m an MTV generation kid! Watching music videos was my inspiration to become an artist,” SaniyÃ© told us. “I would say the only thing I watched growing up was mostly MTV, cartoons, and gymnastics (I used to be a gymnast!) and thatâ€™s about all I cared about back then. Â The process to get to where I am today has been an incredible journey thus far. Definitely bumps in the road, but thatâ€™s what makes it fun.”

The young songstress has won many awards including the Grand Prize in the prestigious John Lennon Songwriting Competition. Her music videos aired on MTV Europe, Delta Airlines, and was on CD compilation alongside Grammy-winning artists including Tori Amos, Sarah Bareilles, Sarah Mclaughlin. She sang the national anthem in front of 20,000 people before the Los Angeles Clippers NBA game at the Staples Center in LA, went on a US national tour, headlined at Hotel Cafe to a sold-out crowd, and opened for multi-platinum singer/songwriter, Lisa Loeb all in the same year.

SaniyÃ© currently has a single out called “Man Outta You”Â that canÂ be heard in thousands of stores across the US including Hallmark, Whole Foods, Cambria Suites, Williams Sonoma, and more. “What I love about [Man Outta You] isÂ the attitude and the vibe. Itâ€™s dark, smokey, mysterious, sexy, and the woman character in the song is strong, confident, and a tease. Â Itâ€™s an incredibly fun character to play,” SaniyÃ© told us. 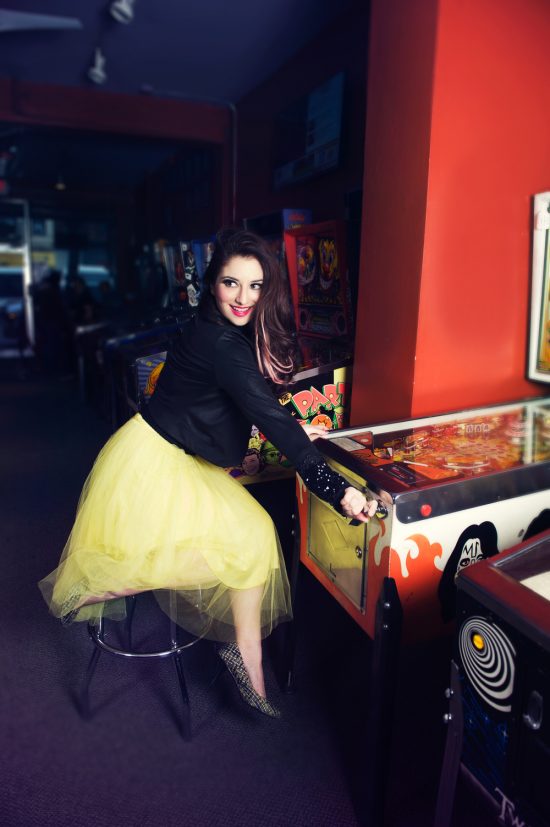 “Man Outta You” happened completely by accident which makes the singer/songwriter love it even more. “While waiting for another songwriting session, Athena Marie Byrne, Bernardo Aguilera, and I were just hanging out in the songwriting room at Revolver Studios in Los Angeles, when we kinda just started jammin out and the song started to take shape. Â Thatâ€™s when we knew we should be writing this song. Â As soon as we were done I wanted to record it! Â Usually we write to pitch to other artists, but I knew I wanted this one. Â I recorded it shortly after with producer Mikal Blue, with some additional production touches by Snipe Young, and it was done. Â Luckily I got the thumbs up from both Athena and Bernardo to put it on my new album,Â Letâ€™s Play!” SaniyÃ© says.

SaniyÃ©‘s full-length albumÂ Let’s PlayÂ is expected to drop on June 24th. “My album is calledÂ Letâ€™s PlayÂ because the music is about being playful, fun, young, and bringing to the surface oneâ€™s inner child. I lost my father when I was just a baby, so I only know him from the stories my mom and other people tell me. He was all about playfulness, youthfulness, and had a carefree attitude on life and never took things too seriously. Luckily the genes have passed onto me, except that I do take some things very seriously. TheÂ Letâ€™s PlayÂ album is also just FUN music. I didnâ€™t want to get too serious, deep, or dark on this one. Â Itâ€™s a summer album for sure, one for nice weather, and windows rolled down.”

SaniyÃ©Â wants people to feel like you’re at a never-ending sleepover when listening to her music. “My musicÂ sounds like Lily Allen and Regina Spektor decided to have a cocktail party at Ingrid Michaelsonâ€™s house. Drinking a bit of whiskey, dancing, then getting into kitty onesie PJâ€™s and putting the playstation on for a competitive game of Mario Kart. Â Then I show up with my Sega and we switch to Sonic. Â Taylor Swift Skypes in for a bit. Â Afterwards, and just for a little bit, we light some candles and chillax with ice cream at the end of the night. But itâ€™s a sleepover, so the night really never ends. Â Dancing erupts once more. Rinse and repeat.”