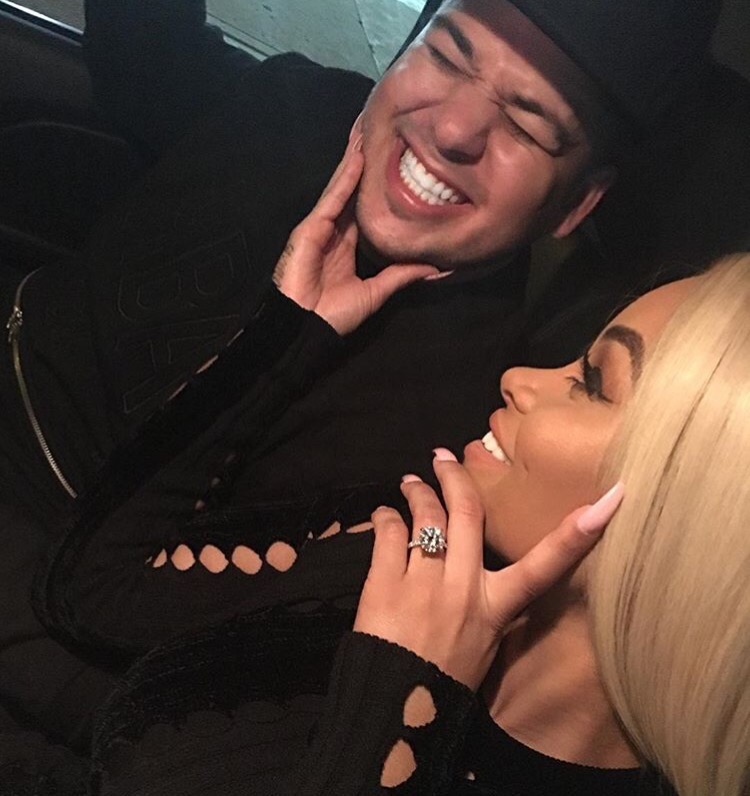 Do you hear that? It sounds like wedding bells and trouble to me.

Rumor has it that Rob Kardashian has popped the question and is now engaged to exotic dancer/model Blac Chyna.

On Tuesday (April 5), his girlfriend of 2 months posted a photo on Instagram of herself sporting a possible engagement ring while caressing her hubby’s grinning face. The caption simply reading, “Yes!!!”.

Neither party have confirmed or denied the rumor, but that hasn’t stopped people from speculating on their interesting situation. Not only does it mean that another Kardashian might be off the market, but it just made things even more complicated with his family.

Rob’s half-sister Kylie Jenner is publicly dating rapper Tyga, who just so happens to be Blac Chyna’s baby daddy. In addition to that, Rob’s other sister Khloe Kardashian has had issues with Blac Chyna’s bff Amber Rose in the past. Rose is famously known for dating Kanye West, who everyone knows is married to sister Kim Kardashian. Now that is something you only see in movies!

It seems as if the only person who really supports Rob’s relationship is Kris Jenner who recently told an Australian radio station that Blac Chyna “seems like a really nice girl”. Kris went on to say how her son seems to be “very, very happy lately” and that she believes he is in a “really good place”.

This isn’t the first time a quick engagement has occurred within the Kardashians, but we’re hoping it won’t end up like the rest of them. Whether they really are in engaged or not, we’re wishing these lovebirds the best of luck!

Do you think they’re really engaged? Are you for or against it? Sound off in the comments or tweet us your answers @CelebSecrets4U!