Girl Meets World was the official spin-off for the hit television series Boy Meets World. It centers around Cory and Topangaâ€™s 13-year-old daughter Riley Matthews (Rowan Blanchard), her brother Auggie Matthews (August Maturo), and her best friend Maya Hart (Sabrina Carpenter). Over the course of three seasons, Riley has faced may life lessons, whether it be from friends, family, growing up, and dating.

Like Boy Meets World, the show isn’t afraid to tackle real issues that teens experience and can relate to. It taught audiences how to deal with bullying, peer pressure, and learning to be yourself. The show tackled it all.

The series premiered on Disney Channel on June 24th, 2014, but unfortunately the announcement has been made that the show is officiallyÂ coming to an end tonight, January 20, 2017.

In tonight’s episode titled “Girl Meets Goodbye,”Â Topanga struggles with a decision about whether or not to pursue a job opportunity overseas in London. She seeks out the advice of her friends, teachers and family along the way.

Following the announcement of the Emmy-nominated series is coming to an end, hereâ€™s a look back at some of the showâ€™s best moments: 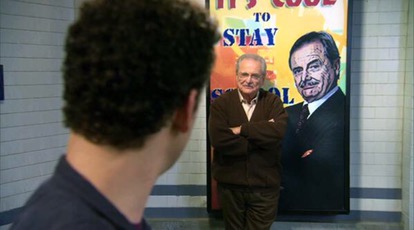 The pilot; the episode that started it all. The pilot ranked over 5.2 million viewers, becoming the single most watched pilot on the Watch Disney App. You get an introduction of whole the characters are, rebel, free-spirited Maya Hart (Sabrina Carpenter) and sweet, kind-hearted Riley Matthews (Rowan Blanchard). You see Cory Matthews (Ben Savage) walking the footsteps of favorite teacher, Mr. Feeny, in not only teaching, but giving life lessons. In the last scene, you see Cory looking at a poster of Mr. Feeny in a way of getting reassurance of his life so far. The moment was meant as a reference to Cory and Feeny’s final conversation in Brave New World: Part 2 (2000). Â Mr. Feeny’s advice will stay with fans forever.

What do we love most about Girl Meets World? The series isn’t afraid to tackle real issues that teens experience today, from dating, friendships, in trying to fit in and be popular, but most of all bullying. This episode explored the motivations behind bullying and how to handle the situation without alienating anyone involved. Mr. Matthews’ entire class stood up to bully Billy Ross, letting him know that they all had flaws by writing it down on their forehead and no one should be made fun of it for it.

“We’re all human beings. We’re all on the same team. And if we scent our own flaws because we see them in others, it’s true friends that help us wipe them away”, Cory Matthews teaches the class.

The last episode of the first half of season 1, where we get to see the whole Matthews family together and we find out how the youngest Matthews, Josh, grew up. If that wasn’t enough we get to see Mr. Cory, Shawn Hunter (Rider Strong), and Cory Matthews back together – 4-EVA! The best part of the episode is the connection you see from the original Boy Meets World and Girl Meets World, where Riley and Maya realize that they are Cory and Shawn – while all four sit at the bay window.

“Maybe you are like me and Cory”, Shawn Hunter admits to Riley.

This episode not only brings us Riley’s first date, but her first kiss. Riley is growing up and Cory can’t handle the emotions of his little girl going on a date, so he forces Maya and Farkle to go on a double date with them. Being the best friend Maya is, she agrees. Riley and Topanaga talk about her and Cory’s first dates, bringing back memories for BMW fans. But this episode is more than just about growing up and dating, it’s about friendship. Lucas tells Riley to go help her best friend during their first date because that’s what most important, and she does.

“You know those moments we were talking about that we’re going to remember forever? This is one of them”, Riley Matthews

If you were a fan of Boy Meets World, this episode will hold a special place in your heart. It tugs at your heart strings in various ways, from bringing back beloved Mr. Feeny and the infamous “FEE-HEE-HEE-HEE-NAY” call to bringing back Shawn Hunter and the capsule that brought back so many bittersweet memories. But having the new characters do the “Feeny Call”, getting wisdom from Mr. Feeny himself, and putting their items into a capsule all came full circle for us.

A new teacher is hired, after Riley’s English teacher retires. This new teacher, Harper Burgess, uses unconvential ways of learning to engage their students, inspiring them to learn – including Maya. Telling them to read Batman vs Superman: Dawn of Justice,Â which teaches the teens more than just about superheroes. This soon causes trouble with the Principal and when Cory attempts to defend the teacher, his job becomes becomes jeopardized. Sound familiar? It’s a reference to their old teacher Mr. Turner, who taught them in non-traditional ways! This episode is a standout as how much an individaul can affect others, and to never judge a book by its cover.

Girl Meets RileytownÂ became one of the most emotional and powerful episodes of Season 2. GMW not only tackled another important issue that teens deal with today, cyberbullying, this episode included one of Rowan Blanchard‘s best performance. She shows this true vulnerability and her dynamic range. In this episode everyone is sending something is wrong with Riley, but she keeps resisting. Her friends finally discover someone has been sending her threating text messages and bullying her, showing the damaging effects bullying brings. This installment not only shows that you can be strong enough to stand up to bullying by learning to love yourself and accepting who you are, but there’s always help when it comes to your friends, family, and teachers.

“I should be able to fight my own battles, Lucas”, Riley admits.

“No you shouldn’t, Riley, and you don’t have to. That’s the point of having friends”, Lucas said.

In this episode we learn all about forgiveness when Cory decides to give the class the forgiveness project. Everyone finds is easy to express their feelings to someone they wish to forgive, except for one person – Maya. She finally decided to do something incredibly difficult, forgive her farther for being absent. Maya’s confrontation with her father was another emotional episode by the GMW family. Maya learned the truth about her father and how she wasn’t the reason for her absence, she needed to stop hating herself for something that was done to her. This was definitely one of Sabrina Carpenter‘s best performances, showing true emotion and crying her heart out to a character that wants nothing but love.

“Forgiveness is one of our finest qualities as human beings,” Cory to Maya.

This episode finally wrapped up the long triangle storyline between Lucas (Peyton Meyer), Riley (Rowan Blanchard) and Maya (Sabrina Carpenter).Â In the episode, as the groupâ€™s ski trip comes to an end, Lucas must finally choose between Maya and Riley, ending that little crack in their friendship. This is one of our favorite episodes because Maya realizes she doesn’t like Lucas, she was doing all of this for Riley – to protect her. Pretending to be like her, liking the same boy only to figure it if he is good enough for her best friend. We also get a new taste of love when Josh admits to Maya that he likes her too, and maybe “someday” they can be together. Lastly, it brings back memories to BMW fans when Cory and Topanga visited the ski resort, bringing back the same book Lauren (Cory’s old fling) used on them to see if they’re compatible.

“You’re the only one who’s good enough for me.” -Riley to Maya