QUANTICO - "Fast" - It's career day at Quantico as the NATS meet representatives from various FBI branches to help them decide their future paths. In the future, Alex continues to search for the terrorist, and in the process, discovers some familiar faces - including one who knows the terrorist's endgame, on "Quantico," SUNDAY, APRIL 24 (10:00-11:00 EDT), on the ABC Television Network. (ABC/Philippe Bosse) LENNY PLATT

With only two episodes left in season 1 of ABC’s hit thriller series Quantico, things are quickly heating up as we get closer and closer to finding out who the terrorist is. In case you’re not one of the show’s 6+ million viewers, here is a brief breakdown: Quantico follows main protagonist Alex Parrish (Priyanka Chopra) who just so happens to be suspectedÂ for committing a heinous terrorist attack. Through a series of flashbacks, we slowly see how her story, as well as the story of her fellow recruits, unfolds.

Celeb Secrets caught up with 31 year-old Lenny Platt who plays Drew, one of Alex’s classmatesÂ in her senior class, current love interest and possible terrorist. Check out the exclusive Q&A below as Platt spills about the season’s finale, his character, working with Priyanka Chopra, Ghostbusters, and more!

Quantico airs Sundays at 10 pm EST on ABC. The season 1 finale will be airing on Sunday, May 15th.

CS: Before we start talking about Quantico, I would love to get to know you better – what movies and music are you currently obsessed with?

Lenny Platt: “Well I’m really into the new Kanye West album. I’ve been listening to The Life of PabloÂ a lot. That’s definitely been my jogging music lately.”

CS: You studied criminology before you started your acting career. How did that help you with this role?

Lenny Platt: “I took a lot of police psychology classes and a few criminal psychology classes as well. So understanding the life of a law enforcement officer was really important coming into this. I needed to understand that these people dedicate their life and safety to protect national security. It was helpful to be informed of that. Also, forensics was a really cool class I took in college. My college professor claims to be the inspiration for Gus on the original CSI. He used to analyze bugs at crime scenes and is one of the ten forensic entomologists in the country. They would use that evidence in trials to convict people. It’s wild science! Those kinds of experiences in class really helped me since I’m pretending to take forensic classes on TV.

CS: With your knowledge on that, how accurate is everything on the show?

Lenny Platt: “The show actually has a law enforcement advisor who keeps everything pretty accurate. A lot of the stuff on the show are exercises that FBI go through at the Quantico program. My favorite one was in the TEVOC episode. I was glad that when I got the job, they didn’t do that exercise yet because I knew it meant that I would be able to do it. But yes, they do a great job grounding it even though it is a TV show, which means it’s at a heightened reality. It’s based on actual exercises that the trainees go through. It’s rather impressive how they’ve kept it that way.” 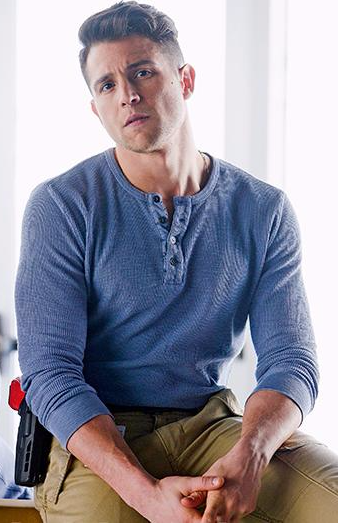 CS: In last week’s episode, Drew had to leave Quantico because of his shaky hand. Can we expect him to pop up again in the last few episodes?

Lenny Platt: “I think it’ll be interested to see how Drew’s story continues in Quantico and that’s all I can really say. For fans that have noticed that he has never appeared in the future -Â  if and when he does – it’ll be interesting for them to see what he is up to in the future. I can’t say more than that though.”

CS: Without giving too much away, what can you tell us about the season’s finale? Will fans be satisfied with the way it ends and do we find out who the terrorist is?

Lenny Platt: “The fans will be absolutely satisfied. I think that the writers have done a great job of laying all the clues there. We were all surprised when we found out whoever that person or persons are. The writers have really tied this web together in an interesting way and all the time the audience has invested will pay off. I promise that.”

CS: Do you know how the season will end?

Lenny Platt: “The shows wrapped so we’ve all finished our part on the show. The production has kept the actors on a need-to-know basis. They have done a great job of giving us what we need to play the character well and bring truth to the things that we’re saying, but we don’t need to know everything that’s going on in the show. It’s important to keep that mystery alive.”

CS: What was it like working with the Quantico cast?

Lenny Platt: “They’re a bunch of lunatics and I love them. I’m just kidding. They’re really professional and a really exciting group to be around. Priyanka is a great leader especially for those of us who came in halfway through the show. She’s the number one on the call sheet and she’s has had a lot of experience. The cast is great. They’re all professional, talented, and very welcoming.”

CS: Everyone on the show is constantly running around doing all these crazyÂ stunts. How did you prepare for this physically straining role?

Lenny Platt: “They had us training with an armor so we had some law enforcement training along with a law enforcement advisor. We also had a stunt coordinator named Josh who taught us a lot of the wrestling and grappling moves you see on the show. A lot of the fight scenes were choreographed by Josh as well. It’s intense. They had me dangling off the side of a skyscraper the other week! We had to go rehearse at a rock climbing gym and I had to learn how to fall off a rock wall which was crazy.”

Lenny Platt: “Yeah it was! Those ropes aren’t built to actually let you fall that far so we had to do a little movie magic so it was something that had to be really rehearsed. I spent a few days climbing up and down a wall. It was an intense, physical workout, but the show keeps us all in tip-top shape.”

CS: Have you ever rock climbed before?

Lenny Platt: “I’ve been to a rock wall before, but that was the first time I jumped off a building. Even though it was blue screen for a lot of that, I was still on a rope on the side of the building so getting to live out my “John McClane” dream for a day was awesome.”

CS: Other than Quantico, are you working on any other projects at the moment?

Lenny Platt: “Yes, I’ve been working with BBQ Films. We released tickets last week and we’re inviting Ghostbusters fans to come out and dress up with us and immerse themselves into this movie. We’ve been working on this project for a year and I was even working on it when I was filming Quantico. We couldn’t be more excited to kick this thing off in June. We’re screening the classic film as well as celebrating the whole cannon of the Ghostbusters universe. So there will be nods to the second film, the cartoon, even the toys. There’s a whole Ghostbusters world that means so much to a lot of people, myself included. I had all the toys growing up so it was something I really loved and I latched on to. We’ll be showing the classic film as well as getting people excited for the new film that’s coming out. We’ll be having props and exclusive footage to show the fans. It’s been a lot of sleepless nights and a lot of work, so we’re really proud of it.”