The moment we’ve all been waiting for is finally here — Ryan Hamilton and The Harlequin Ghosts OFFICIALLY have an album out!

Titled This Is The Sound, the 12-track album features the previously released songs “Far Cry,” “Get Down,” “Bottoms Up (Here’s To Goodbye)” and the critically-acclaimed “Mamacita,” which was co-written with Little Steven, who also contributes to the song’s rippin’ guitar solo, and has been thriving on radio across the U.K. The band is currently on Steven Van Zandt’s label, Wicked Cool Records, in partnership with The Orchard, and you can hear the album via streaming, physical CD, and even vinyl!

Celeb Secrets sat down with the band’s frontrunner to discuss the group’s formation and really dive into what their unique sound is really like. Hamilton also revealed what he’s most proud of off the record and what he wants listeners to take away from it. 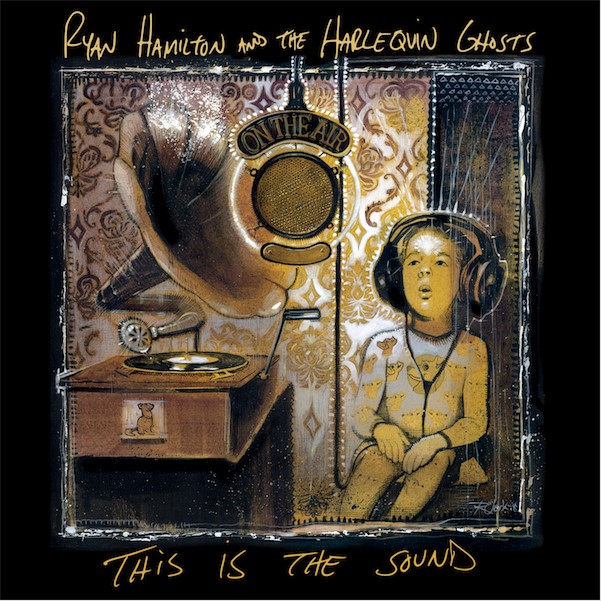 Celeb Secrets: Can you talk to us about the inception of your band — how did you all get together and what made you want to pursue music as a group?

Ryan Hamilton: “Me, Mickey (drums) and Rob (bass) were in a previous band together. That band had a VERY dramatic end (it’s a long story)…But the 3 of us decided to stick together and start something new. We eventually added 2 more members (Carol on keys and Dave on guitar) and we haven’t looked back.”

Celeb Secrets: Is there a special meaning behind the name The Harlequin Ghosts?

Ryan Hamilton: “We have the honor of being named by Stevie Van Zandt. We decided we wanted to change the band name and were throwing ideas around. I wanted something weird and different. Stevie mentioned “Harlequin Ghosts” and we were IN! I’m a big Tim Burton fan, particularly The Nightmare Before Christmas. There’s a character called the “Harlequin Demon.” But “Demon” sounds super heavy metal. Without giving too much away, just know, for me, the meaning lies there…in that Tim Burton character.”

Celeb Secrets: What’s the sound like for your new music? Do we hear influences from the band’s previous projects, or is it something new and fresh?

Ryan Hamilton: “Our band has a sound all its own. We’ve built a reputation as a killer live act, with a huge sound. I think we sound the way we do because of our different backgrounds. I’m the only American in our band. The rest of our band are from the UK. Mickey & Rob come from the UK rock/metal world of the late 80s & early 90s. That’s the music they love. I grew up in small town Texas, surrounded by country music. I also fell in love with the music my parents listen to – The Beatles, The Stones, etc. and Tom Petty is my hero. So, you take those British rock/metal influences, mix them with Texas style classic rock and country and you get the rock n roll cocktail that has become our band. It’s definitely new and fresh. But it’s also built on the foundation I’m very proud to have built with our band and its sound.”

Celeb Secrets: Speaking of the album, the debut record is officially here. Talk to us about the writing, recording and production process.

Ryan Hamilton: “I’ve never been one to TRY and write a song. I can’t just sit down and decide to write one. I have to wait for them to come to me…then I have to grab them, before they evaporate into the ether. I capture them and record an acoustic demo all at the same time. It happens super fast. Once I have 30-40 of those ideas, I start narrowing them down and sharing with the band. They help narrow it down even further. Once we’ve decided on 15-ish, I start to flesh out the songs and finish them. This time, though, we have Stevie Van Zandt on our side! He helped with every single song/demo. Sent notes, made suggestions, and pushed me harder than anyone ever has. I am so thankful for Stevie and his amazing label. Our producer, the amazing Dave Draper, is based in the UK, with the rest of the band. I recorded some basic tracks (guitar and vocals) in my home studio, here in Texas, but we recorded the bulk of the album at Tower Studios in Pershore, UK. Dave is the best producer I’ve ever worked with. He is a very important part of making our band, and this album in particular, sound the way it does. I’ve never been more proud of an album.”

Celeb Secrets: What’s one thing you are most proud of from making the collection of songs?

Ryan Hamilton: “Probably taking a few of the demos that Stevie wasn’t particularly impressed with and reworking them into the strongest songs on the album. The strongest singles (“Mamacita” and “This is the Sound”) were both reworks/rewrites. Stevie even wrote “Mamacita” WITH me! Such an honor.”

Celeb Secrets: Since this is a debut album, what’s one thing you want people to take away from listening to it?

Ryan Hamilton: “That it’s an ALBUM. Not just that, that it’s the best album, front to back, they’ve heard in a very long time.”

Celeb Secrets: For Celeb Secrets, what’s a behind the scenes secret from recording the album that we wouldn’t know when listening to it?

Ryan Hamilton: “I recorded all of the vocals in my pajamas. Haha. True!”

Want more Ryan Hamilton and The Harlequin Ghosts? Listen to the full album below and let us know what you think of it by either leaving a reaction at the bottom of the post or sending us a tweet at @celebsecrets.

Ryan Hamilton and The Harlequin Ghosts