The 74th Annual Golden Globe AwardsÂ returned to NBC last night and to say it was amazing would be an understatement.

Hosted by Jimmy Fallon,Â the event featured many laughs, tears, and gorgeous fashion. To view all of our coverage from theÂ 74th Annual Golden Globe Awards,Â click here.

We racked up our top favorite moments from the show, and our first was the epic opening scene. Fallon was joined by Tina Fey, Justin Timberlake and fellow nominees such as Ryan Reynolds, Amy Adams, and the kids from Stranger ThingsÂ and they spoofed the opening scene of La La Land, one of the biggest winners of the night! And to top it off, Barb from Stranger Things made an appearance!

Our second favorite moment was the beginning of the show, when Jimmy Fallon made fun of Mariah Carey when the teleprompter was experiencing technical difficulties. As some of you may remember Mariah has a reallyÂ awkward performance at Dick Clark’s New Year’s Rockin’ Eve with Ryan Seacrest 2017 show. After his teleprompter fail, Fallon said, â€œI just got off the phone with Mariah Carey and she thinks Dick Clark Productions sabotaged my monologue.â€ Priceless!

Our third favorite moment from the show was whenÂ Viola Davis wonÂ Best Supporting Actress for her role in Fences. She looked fierce in her beautiful yellow dress and gave the perfect speech. 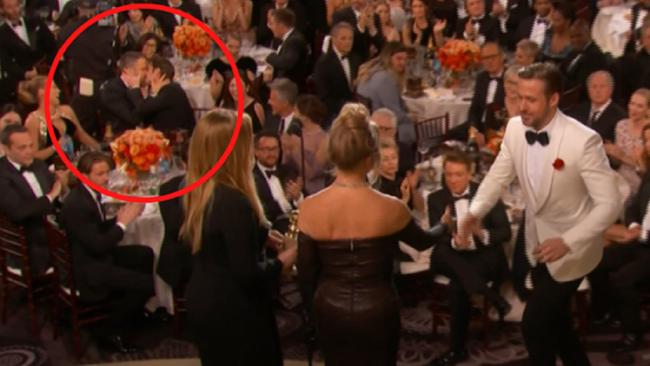 Another highlight from the show was when Ryan Reynolds and Andrew Garfield kissed! We’re not exactly sure why they did, but if you look closely when Ryan Gosling wins they kiss!

Next up, the legend Meryl Streep was honored with the Cecil B. Demilli Award, and gave an empowering speech that called out Donald Trump without even mentioning his name. Meryl spoke the truth when she stated “Disrespect invites disrespect. Violence incites violence. When the powerful use their position to bully others, we all lose” She also made a tribute to her friend, Carrie Fisher. “As my friend, the dear departed Princess Leia, said to me once, ‘Take your broken heart, make it into art,” Crying.

Last, but certainly not least the touching tribute the HFPAÂ made for Carrie Fisher and Debbie Reynolds by showing a brief reel of their most iconic films, Singing in the Rain and Star Wars.

What were YOUR favorite moments from the show?

Veronica Toscano is an intern at Celeb Secrets. She is a communications major with a minor in TV/Film Production at Orange Coast College. She loves mac n cheese, art museums, photography, and film. In her free time, she enjoys going out to concerts, traveling, reading, and hanging out with friends.