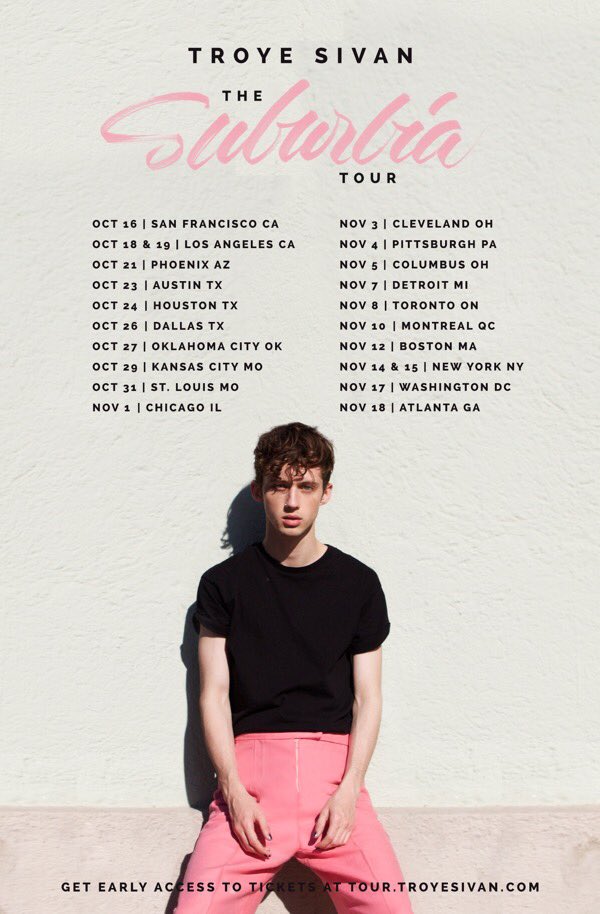 Troye Sivan is heading back on tour this fall!

The “Youth” singer will embark on his second North American leg of his world tour,Â The Suburbia Tour,Â kicking off on October 16th with a show at Bill Graham Civic Auditorium. The fall run willÂ include two-night stands at the Hollywood Palladium in Los Angeles (October 18 & 19) and Terminal 5 in New York City (11/14 & 15).

A ticket presale will begin on Wednesday, May 18, at 10:00 a.m. local time atÂ www.troyesivan.com.Â Fans who pre-order the deluxe cassette edition ofÂ Blue Neighbourhood,Â or purchase any other item from his official musicÂ storeÂ will have access to the pre-sale for a chance at advance tickets.Tickets go on sale to the general public beginning Friday, May 20, starting at 10 a.m. local time.Â A portion of ticket sales will go toÂ The Ally Coalition, which supports LGBTQ causes and the fight against discrimination through education, awareness and advocacy.

This weekend, Troye will be heading to Las Vegas to perform as the Kia One to Watch artist at theÂ 2016 Billboard Music Awards.Â

Check out the tour dates forÂ The Suburbia TourÂ below…